…and here is the breakdown of fiction published in New Zealand in 2015, by the gender and ethnicity of the authors (as far as I can make out).

In terms of gender, women dominate in the fiction stakes, with 44 fiction books by women published in 2015 (59% of titles) compared with 30 men (40%). The ‘Other’ category refers here to a book jointly authored by a man and a woman.

Here is the pie chart: 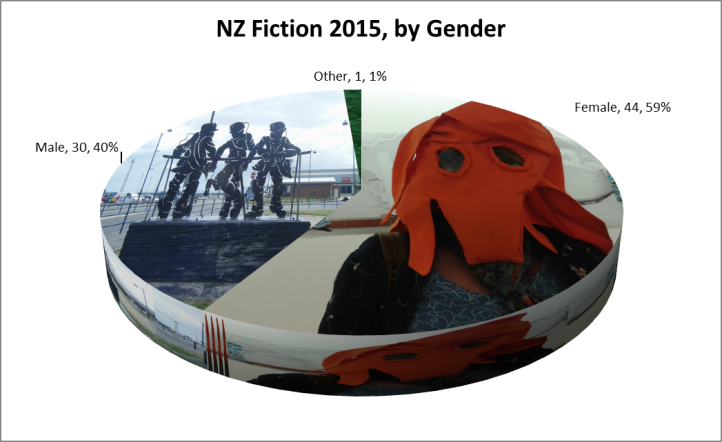 In non-fiction, the proportions are reversed, with 13 titles (62%) by male writers and 8 (38%) by female writers (see below). So it kind of balances out. If you add fiction, non-fiction and poetry together, 82 titles were by women, 83 by men and one by both. Yay, right? (Note: I’ve left out a few categories, like Drama and Criticism, but included Letters & Autobiography).

An analysis by ethnicity, however, tells a miserable little tale indeed.  Here is the pie chart for fiction:

Yep, that’s right, with 68 titles, Pakehā writers got 91% of the pie; Māori writers and Asian/Indian writers got 4% each with 3 titles apiece and Pasifika writers got 1%, with a single title (ie Albert Wendt wrote a book).

By way of comparison, in 2014, 88% of fiction titles were by Pakehā writers, 7% by Māori writers, 5% by Asian/Indian writers and none by Pasifika writers.

And for non-fiction, 85% of titles (18 in total) were written by Pakehās and 5% (1 title each) by a European/Jewish writer, a Māori writer and a Pasifika writer.

How do I know what ethnicity everyone is, I hear you cry. Well, I don’t know for sure. I visit at least 3 websites (author pages and so on) and look for clues. So there may be some undercounting. If a writer does not describe themselves as Māori, Asian or Pasifika and does not mention an iwi affiliation, I have counted them as European/Pakehā.

One last pie: all fiction, non-fiction & poetry titles for 2015. 90% of titles were by Pakehā, 4% by Māori and 2% each by European/Jewish, Pasifika and Asian authors. What a lot of pie…

For the record, I’m female and Pakehā (I was born in the UK and grew up in England, South Africa, Australia and New Zealand; I’ve lived in New Zealand since I was twelve.) Two of the books published in 2015 were mine.

I put this analysis together because it matters to me. Fairness matters. Having a national literature that represents our national population matters. Being able to read a diverse range of voices matters. Also, I’m curious (in more ways than one) and like playing with spreadsheets 🙂

My source for the books published in 2015 is the Journal of Commonwealth Literature. Previous posts on this subject can be found here: