He settled
where the sea made a distant mirror

glimpsed from the sloping decks
of fast-subsiding houses.

these were his background music,
his theme and variations.

From cliff-tops, from office blocks,
he would monitor departures,

courses set for distant harbours
rich with spice and contraband.

Retired, he had his garden,
books, the heavy ticking

of the farewell clock. He searched
tide tables, shipping movements,

looking for a sailing time,
a vessel heading home.

Tim Jones (pictured above) is a poet and author of both science fiction and literary fiction who was awarded the New Zealand Society of Authors Janet Frame Memorial Award for Literature in 2010. Among his recent books are short story collection Transported (Vintage, 2008) and poetry anthology Voyagers: Science Fiction Poetry from New Zealand (Interactive Press, 2009), co-edited with Mark Pirie. Voyagers won the “Best Collected Work” category in the 2010 Sir Julius Vogel Awards.

Tim’s third poetry collection, the excellent Men Briefly Explained, has just been published by Interactive Press, and he is in the final stages of a book launch tour. Aucklanders can catch the tour on Tuesday 1 November at Poetry Live, Thirsty Dog, 469 Karangahape Road, 8pm.  Tim will also be reading at the Poetry Society in Wellington on Monday 21 November at 7.30pm (The Thistle Inn, 3 Mulgrave St, Thorndon) together with Keith Westwater.  I very much enjoyed the Wellington library tour stop last week.

I chose ‘Harbours’ because it’s a lovely, musical poem, though tinged with “mournful tones”.  Also, it made me think of my father (who isn’t retired yet) as he was in the merchant navy in his youth and spends his spare time building decks.

For  more on the engaging and readable Men Briefly Explained, see http://timjonesbooks.blogspot.com/p/men-briefly-explained.htm  You can also link to the book’s Facebook page, where I was interested to learn that one of the poems was used as the text for a choral work composed by Brett Weymark, which premiered in Sydney recently.

You can click here or on the quill to the left for more Tuesday poems. 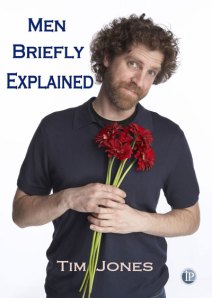