The phone rang: it was God.

We’re doing some market research, he said.  How do you find earth, these days?  Somewhere between Venus and Mars, I said, ha ha.  No, really, he said.  Well, I told him, we liked your original concept but we’ve workshopped it into something sexier, more happening, more 21st century. We’ve eaten most of the fish, cleared an impressive amount of forest and I’m afraid some species proved insufficiently competitive for the global economy.  I liked it how it was, said God.  That’s all very well, I said, but Progress, you know – can’t stand in the way.  You lot won’t be happy until you’ve used up all the good bits and moved on to the next planet in some kind of galactic Mad Hatter’s Tea Party, he said.  He sounded sad, so I hung up.

The phone rang: it was Janis Joplin.

You’re dead, I said.  And it’s half past three in the morning.  What do you want?  It gets boring on the other side, she said.   Sometimes we just dial numbers at random to find some-one to talk to; I died before my time.  Tell it to Elvis, I told her.  And I hung up.

The phone rang: it was Truth and Beauty, on a conference call.

Which of us do you prefer? they queried.  Do you want the honest answer? I asked.  Or one that’s exquisitely phrased?  While they argued, I hung up.

The phone rang: it was Zippy the Pinhead.

Are we having fun yet? I asked him.  I won’t ever put anchovies in the toaster again, he replied.  I’m trapped in a black hole with Mozart’s miso soup.  Thousands of orange polyester suits have invaded my brain.  He started making sense, so I hung up.

The phone rang: it was Death.

Wrong number, I said.  And I hung up.

The phone rang: it was me.

Now what’s going on here? I asked.  Am I trapped in an existential paradox?  Are you the past me, the future me, or an alternate universe me?  Are you my conscience, the inner me, the me I’d like to be or some kind of all-knowing über-me?  I just called to say hi, I said.  And I hung up.

The phone rang:  it was Hecate, Goddess of the Night.

All hail, Old Witch, I said.  You’re at a crossroads, she told me.  Which path do you take?  Well, I said, the earth is more or less spherical, so whichever way you go, eventually you’ll end up back where you started.  It’s the journey that counts, she cackled.  Put down that phone and get travelling.  And she hung up. 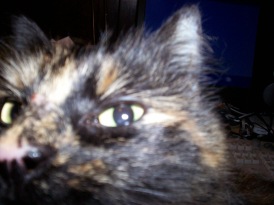